Mina and The Count

Mina and the Count is an animated television series created by Rob Renzetti, which was never brought into development as a full-fledged animated TV series. Instead, animated shorts of this series aired on the two animation anthology showcases, Cartoon Network's What a Cartoon! and Nickelodeon's Oh Yeah! Cartoons. Despite much demand by fans to get it shown as an official series, Frederator Studios president Fred Seibert confirmed there is currently no development of the show as a whole whatsoever.

The original Mina and the Count pilot short, "Interlude with a Vampire," premiered on The What-a-Cartoon! Show on Cartoon Network in November 5, 1995, making it the only short to be featured on both creator-guided short projects guided by Fred Seibert. The short was about a seven-year-old girl named Mina Harper (a play on Draculacharacter Mina Harker) and her encounters with a vampire during a night that she is sleeping (the count had accidentally found her when he was looking for "Nina Parker," another reference to the Dracula character). The aforementioned further episodes concerned the vampire, known simply as Vlad the Count , his friend Mina, her older sister Lucy, school bully Nick, Mina's father Mr. Harper, a handful of monsters and Vlad the Count's strict servant Igor.

Note: The original pilot aired on What-a-Cartoon!, and the rest were animated shorts that aired on Oh Yeah! Cartoons. 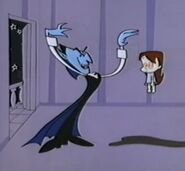