Vampedia
Register
Don't have an account?
Sign In
Advertisement
in: Characters in Dracula, Females, Protagonists,
and 5 more

In the beginning of the novel, she is a schoolteacher who is engaged to Jonathan Harker and is best friends with Lucy Westerna, who is Dracula's first victim in England. She is bitten by Dracula at least three times, but she does not become a vampire right away. Rather, she slowly transitions despite her crew's futile efforts. In one such effort, Professor Van Helsing tries to bless her with the holy bread, but the piece combusts as soon as it placed on her forehead. Mina is cured by the ending of the book, when Dracula is killed. She becomes instrumental in the tracking down and destruction of the vampire, and that scene is told from her POV. Furthermore, a large portion of the book is made from fictional newspaper clippings from which she collects. In the final pages of Dracula, it shows that Johnathon and Mina are happily married with a new-born son, named Quincy Morris.

She begins the story as Miss Mina Murray, a young school mistress who is engaged to Jonathan Harker, and best friends with Lucy Westenra. She visits Lucy in Whitby on July 24 of that year, when schools would have closed for the summer.

After her fiancé Jonathan escapes from Count Dracula's castle, Mina travels to Budapest and joins him there. Mina cares for him during his recovery from his Psychological traumatic encounter with the vampire and his brides, and the two return to England as husband and wife. Back home, they learn that Lucy has died from a mysterious illness stemming from severe blood loss as the result of repeated attacks by an unknown, blood-drinking animal; — the animal, they learn, was none other than Dracula taking a different shape.

It is because of Mina that the party learn of the Count's plans as she is the one who collects the journals, letters, newspaper clippings and fits all of the relevant information regarding the Count together, places them in chronological order, and types out multiple copies, giving them to each of the other protagonists to which the end result is the epistolary novel itself. Mina and Jonathan then join the coalition around Abraham Van Helsing, and turn their attentions to destroying the Count. The party uses this information to discover clues about Dracula's plans, and further investigate the location of the various residences he purchased as a means to track him and destroy him. With each subsequent action the party takes being recorded by the various parties and added to the collection of events surrounding Dracula.

After Dracula learns of this plot against him, he takes revenge by visiting — and biting — Mina at least three times. Dracula also feeds Mina his blood, dooming her to become a vampire should she die, afterwards killing Renfield and destroying all of the copies of their epistolary, except for one which Dr. Seward kept in a safe. The rest of the novel deals with the group's efforts to spare her this fate by tracking and attempting to kill Dracula. When Van Helsing attempts to bless her by placing a wafer of sacramental bread against her forehead, it burns her flesh leaving a scar proving that Dracula has made her unholy. Mina slowly succumbs to the blood of the vampire that flows through her veins, switching back and forth from a state of consciousness to a state of semi-trance during which she is telepathically connected with Dracula. Mina then uses her inherent telepathic abilities to track Dracula's movements under the hypnotism of Van Helsing. Dracula later flees back to his castle in Transylvania, followed by the entire group who split up. As Van Helsing takes Mina with him on his journey to Dracula's castle to slay the brides of Dracula, the rest of the party attempt to locate and raid the ship Dracula is using to ambush him. As time goes on, Helsing's ability to hypnotize Mina to obtain intelligence on the whereabouts of Count Dracula diminishes significantly as her appearance and mannerisms become more vampire-like to the point where she even loses her appetite as well as her ability to stay awake during the day despite multiple attempts of Van Helsing to wake her.

While Mina and Van Helsing are at camp, Helsing crumbles sacramental bread in a circular ring around Mina as she sleeps during the day time. Upon waking, she is unable to cross the circle at all. Van Helsing did this as a test to determine that if Mina were unable to exit the circle, vampires would be unable to enter as well. This is confirmed when later in the night, the brides come to the camp, unable to cross into the ring which Mina and Helsing are located. The brides beckon her to join them but fail and fly back to Dracula's castle before sunrise.

When the party kills Dracula just before sunset, Dracula's vampiric spell is lifted and Mina freed from the curse as a result.

The book closes with a note written 7 years after these events about Mina's and Jonathan's married life and the birth of their first-born son, whom they name Quincey in remembrance of their American friend Quincey Morris, who was killed by Dracula's Szgany minions during the final confrontation. The birth of Jonathan and Mina's son signifies hope and life of the new as the novel heads into the 20th century.[1]

Mina (or a similar character) has appeared in most film adaptations of Stoker's novel.

Although she is described in the novel as having light hair, Mina has usually been portrayed as brunette. Sometimes she and Lucy's names are interchanged and in the Spanish version she became Eva. Since Bram Stoker's Dracula (1992) the idea of portraying her as a genuine love interest of the Count has taken hold, a direction chosen in the musical Dracula as well.

In Stoker's original novel, Mina Harker recovers from the vampire's curse upon Dracula's death and lives on to marry Jonathan. However, in some media, Mina is killed at some point in the story, while in others, she becomes a full vampire and keeps her powers after the death of Dracula.

In Dracula the Un-dead, (2009) co-written by Dacre Stoker, a great-nephew of the original author, Mina's son, Quincey, is claimed to be a product of rape and Dracula's biologically human son, conceived at some point when Dracula was attacking Mina.[2]

In From the Pages of Bram Stoker's Dracula: Harker, written by Tony Lee and endorsed by Dacre Stoker and Ian Holt, Mina becomes bound to Dracula's spirit as his remaining allies attempt to use her unborn child as his new body.

In Anno Dracula novel (1992) by Kim Newman, the first in the Anno Dracula series, Mina Harker became a vampire and Dracula's bride. The novel tells an alternative history, where Dracula has won, married Queen Victoria, rules England as her consort and vampirism is widely spread.

Mina Murray (returning to her maiden name after having divorced her husband) is one of the lead characters of Alan Moore and Kevin O'Neill's comic book series The League of Extraordinary Gentlemen. She is a bisexual suffragist and leader of the titular team, and is involved in a romantic relationship with Allan Quatermain. She and Allan are the only remaining members of the initial League after a Martian invasion and subsequently becomes immortal, remaining young even in the year 2009. She is in a polyamorous relationship with the gender-changing omnisexual Orlando. It is implied that she still feels trauma over her encounter with Dracula and has disfiguring scars covering her neck, covering them up with a red scarf.

In A Betrayal in Blood by Mark A. Latham, Mina is portrayed as a more ruthless, calculating individual, going so far as to as to adopt an appearance that subtly resembles the deceased wife of Dr. Watson to colour his views during the first interview between her and Sherlock Holmes. In the course of his investigation into the truth about Dracula's death- Dracula simply a reclusive count in this version of events rather than a true vampire- Holmes realizes that the Harkers actually collaborated to kill Jonathan's former boss, Peter Hawkins, so that they could inherit control of the firm, with Van Helsing using this information to blackmail them into assisting his efforts against Dracula. They are subsequently arrested after a confrontation with Holmes and Watson at Carfax when it is revealed that they stole Holmes' notes on the case.

In the light novels (also later adapted into two anime films and a manga series) Vampire Hunter D, the ancient vampire Count Magnus Lee refers to a "Mina the Fair" who was pursued by the "Sacred Ancestor" (revealed in the English dub of the first film to be "our sire Count Dracula"). It is implied that she may be the mother of D (the son of the Sacred Ancestor).

In the 1997 manga series Hellsing, a character referred to only as "She" is eventually revealed to be Mina Harker's corpse. She died before Dracula (later Alucard) could be defeated, but because he did not die, the curse was still active in her, which the Doctor exploited to create Millennium's vampires.

In the 2005 manga series Dance in the Vampire Bund, the central female vampire protagonist is named "Mina Țepeș", a reference to Vlad Țepeș, one of the inspirations for Dracula. 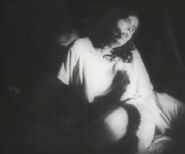 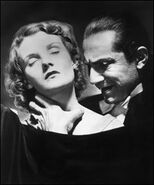 From the 1997 Count Dracula 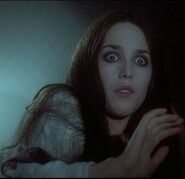 From the remake of Nosferatu

In the all-lesbian Lust for Dracula
Community content is available under CC-BY-SA unless otherwise noted.
Advertisement