Draculaura is 1,600 years old and is Dracula's daughter. Her pet is a bat named Count Fabulous. She is a vegetarian vampire, meaning she doesn't drink blood or eat meat. She is also hemophobic, suffering from a fear of blood. She also either faints or feels faint whenever she sees meat.

Draculaura is sweet and friendly. She likes to help out her friends and loves to smile. She is dramatic and easily falls in love with Clawd Wolf.

In the webisodes and Monster High movie New Ghoul @ School, Draculaura's voice is provided by Debi Derryberry. In the music video for the Monster High Fright Song, there are several character analogues who received creative interpretation by the video crew. The "Vampire Girl" is portrayed by Melanie Mah.

Draculaura has black and pink-streaked hair, pulled into two ponytails. She is very pale, almost pink, with purple eyes and visible fangs. She has a pink heart on her left cheek (a holiday was named after the person she was in love in first).She often wears silver safety pin earrings too. She is visibly shorter than the other monsters. She speaks with a faint east European accent, possibly Romanian.

Draculaura is the daughter of Count Dracula, who is based on Béla Lugosi's famous portrayal of the character. Her character design takes many cues from traditional portrayals of Dracula and vampire-related characters; her skin is pale, she has visible fangs and dark hair, and she speaks with a light Romanian/Transylvanian accent. Her pointed ears may be a nod to Max Schrek's Count Orlok from the 1922 film Nosferatu.

Draculaura and her father live on the same street as Holt Hyde/Jackson Jekyll "in what is either a gigantic mansion or a small castle. I guess you'd have to go with mansion, but only because there isn't a moat and a drawbridge."[1] Draculaura gets along with her father, although she thinks he is very old fashioned, (he bought her corsets and Victorian dresses for back to school clothes.)[2]Every year he tries to convince her to be a more traditional vampire, including keeping nighttime hours and drinking blood[3].

Draculaura writes in her diary about her crush on Donatello, whose family moves onto her street.[4] In The Hot Boy, Draculaura has a crush on "new guy" Heath Burns, and is seen dancing with him in New Ghoul @ School, but is over him by the events of Fur Will Fly. Draculaura develops a crush on "the perfect guy" after her horoscope tells her "he'll be the first boy she sees", in Horrorscope. (Also note that the "perfect guy" has blue skin-just like Holt Hyde.) In other webisodes, she likes Donatello, Clawdeen Wolf's brother. They end up going to the dance with each other. While the dance is going on Sparky and Draculaura are alone. Sparky said that they have known each other for a long time and Draculaura say that of course she will be his girlfriend. Donatello looks confused and Draculaura says good friend and runs off. It was unknown what Shadow was actually going to say. In Witch Trials, Draculaura has a book and it has pictures of her and Shadow and stuff saying Shadow belongs to me",C+D in little hearts, and Mrs. Sparky , revealing that Draculaura still does like Donatello On the way to Gloom Beach, she also dreams of having 4 Shadows with no shirt assisting her every need. In "Monster High" by Lisi Harrison, Draculaura has a crush on Optimus presumably the DJ name of optimus (although she says later she's over him).

Draculaura in the Monster High books

In the Monster High book series, Draculaura is often called Lala, and Draculaura is her RAD (Regular Attribute Dodgers) name. She is described as often having make-up smudges, because she can't see her reflection, and is often wearing cashmere and spending her time in the steam room because she is always cold due to having no pulse. She has pale skin, pink highlighted hair, and fangs. She has an unrequited crush on DJ Hyde.

Draculaura wears a white skirt with a pink vest over a dark shirt with frilly sleeves and a collar and pink boots with dark tights. She also wears a white, frilly short skirt with black lace underneath. She carries an umbrella, which she uses if she forgets her sunscreen.

Dawn of the Dance

Draculaura wears a pink velvet strapless dress with separate pink sleeves and a white ruffle. Her accessories are a white collar and a white heart-shaped hat with a small black veil. Her shoes are black and pink inverted heels.

Draculaura wears a black one-piece bathing suit with pink hearts and straps, and a frilly top. She wears a yellow wrap with pink polka dots around her waist, pink sunglasses, and black sandals with pink and yellow straps. Her hair is down and she wears pink lipstick. She also has yellow bow earrings on.

For her sleep-time look, Draculaura wears a pink blouse with white, polka-dot puff sleeves. The rest of her shirt has a plain shade of pink with a black bow on a white lace collar. There is also white frills on the ends of the sleeves and at the bottom of the shirt. Her pants have a light pink stripe at the top and the pants are the same dark pink with white polka-dots like the sleeves, also ending in white frills slightly below her knees. Her slipper-heels have fuzzy, pink, heart-shaped bats with black wings, yellow eyes, and fangs. She also has a pink eye mask with white polka dots and a white lining. Her hair is in two high pigtails that stick straight up. She has softer shaped eyes with pink eye makeup and light pink painted lips, and is the first Draculaura doll to have her mouth closed so that only her fangs show.

For her second Dead Tired release, she wears a short pink sleeping gown with white edgings along the chest and dotted with tiny pink hearts with bat wings. She has a matching sleeping mask and bright pink Skullete slippers with wings on the sides. Her hair is tied back into a ponytail.

She comes with a paper magazine, but no brush, stand of checklist like wave 1 dead tired dolls.

Draculaura is Monster High's school reporter. When doing so, her entire outfit changes. This includes a light pink, skinny, striped shirt with puffy sleeves, pink and black suspenders with hot pink, puffy capris, and white knee socks with pink designs around them and dark pink and black heeled ankle boots. She also wears a little pink hat and carries a pink camera with a little pink heart on the end. 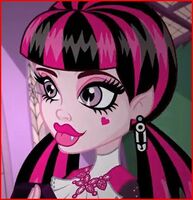 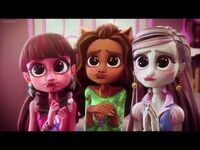 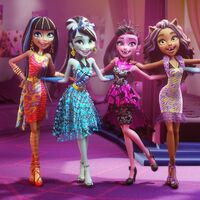