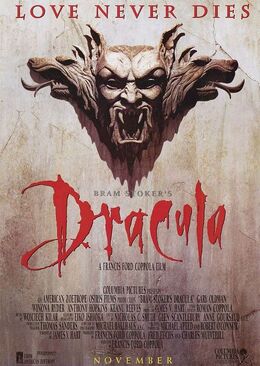 Dracula (also known as Bram Stoker's Dracula) is a 1992 American Gothic horror-romance thriller directed and co-produced by Francis Ford Coppola, based on the novel Dracula by Bram Stoker. It stars Gary Oldman as Count Dracula and Winona Ryder as Mina Harker, also featuring Anthony Hopkins as Professor Abraham Van Helsing, Keanu Reeves as Jonathan Harker, and Sadie Frost as Lucy Westenra. Dracula was greeted by a generally positive critical reception and was a box office hit. The film's score was composed by Wojciech Kilar and featured "Love Song for a Vampire" by Annie Lennox as the closing credits theme song.

In 1462, Vlad Dracula, an individual from the Order of the Dragon, comes back from a triumph against the Turks to discover his better half, Elisabeta, has conferred suicide in the wake of getting inaccurate new of his demise. Irritated that his better half is dammed killing herself, Dracula befouls his church and revokes God, proclaiming that he will become alive once again to retaliate for Elisabeta with every one of the forces of darkness.[1]  In an attack of wrath, he cuts the sanctuary's stone cross with his sword and beverages the blood which spills out of it.

In 1897, recently qualified sailsman Jonathan Harker takes the Transylvanian Count Dracula as a customer from his partner Renfield, who has gone crazy. Jonathan goes to Transylvania to mastermind Dracula's land obtaining in London, including Carfax Abbey. Jonathan meets Dracula, who finds a photo of Harker's life partner, Mina and trusts that she is the rebirth of Elisabeta. Dracula leaves Jonathan to be assaulted and bolstered upon by his brides and sails to England with boxes of his local soil, taking up living arrangement at Carfax Abbey. His entry is prognosticated by the ravings of Renfield, now a prisoner in an insane asylum ran by Dr. Jack Seward's.

In London, Dracula rises as a wolf-like animal in the midst of a furious electrical storm and entrancingly lures Lucy Westenra, with whom Mina is staying while Jonathan is in Transylvania, he then proceeds to rape and bite her. Lucy's disintegrating wellbeing and behavioral changes prompts Lucy's previous suitors Quincey Morris and Dr. Seward, alongside her life partner, Arthur Holmwood, to summon Dr. Abraham Van Helsing, who perceives Lucy as the casualty of a vampire and it was not accidental.[2] Dracula, seeming youthful and attractive amid sunlight, meets and charms Mina. At the point when Mina gets word from Jonathan, who has gotten away from the palace and recuperated at a religious community, she goes to Romania to wed him. In his wrath, Dracula changes Lucy into a vampire. Van Helsing, Holmwood, Seward and Morris murder Lucy the next night.

Community content is available under CC-BY-SA unless otherwise noted.